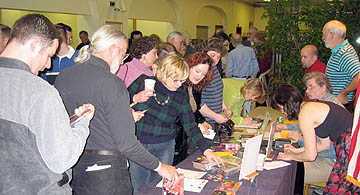 CDs sell well at The Troubadour

To: Performers and agents

Re: Getting booked at the Troubadour

The Troubadour is a concert series run by the Folk Project, a non-profit folk music and arts organization. We have been in continuous operation since 1975. We use the facilities of the Morristown Unitarian Universalist Fellowship, 21 Normandy Heights Road, Morristown, NJ. (About 1 hour west of NYC and an hour and a half north of Philly.) We hold shows every Friday, year round, and the second Friday of most months is an open stage/audition night. The music we present is "folk" music in its broadest sense. That is, in addition to traditional American and ethnic "folk" music (in the purist’s definition), we welcome music of contemporary, primarily acoustic songwriters, and other types of music more folkie in attitude than in content. Our performers are professional and semi-professional, both local and those on the regional, national and international coffeehouse, concert, and festival circuits. Preference in booking is given to members of the Folk Project, with more consideration given to those members who are active in our activities or organization. An act's draw in the local area does carry some weight in booking decisions.

Our usual format is an Opening Act and a Feature Act. The Opening Act does a 30-minute set to start the show, and the Feature does two 45 minute sets with an intermission between them. Our capacity is around 200, and our actual paid attendance over the past year has been averaging around 90, plus an additional 15 or 20 for volunteers and comps. Our pay scheme for Feature Acts is based upon a guarantee plus percentage of the gate plus an archaic, but traditional and effective, donation basket, and of late has been averaging around $1000 (plus or minus a whole lot, depending upon the performer's draw, the time of year, the stars, and other factors of Kentucky windage.) The Opener's fee is a straight $75 for a solo, $120 for a duo, or $180 for a trio or more. The audience does tend to buy a lot of recordings, though, so if you have any, it can add a tidy extra sum. The average product sale is about $500 for feature acts and $335 for openers.  The artist keeps 100% of product sales. The second Friday of most months the format changes to an Open Stage, which can be used for audition purposes. (The Open Stage is occasionally moved or pre-empted for events other than the Open Stage, so check the Troubadour Web Page to confirm the schedule before showing up. The website also gives our Open Stage procedures.)

What we do offer you is the finest of all possible audiences. Our crowds average around 90, and are knowledgeable, and packed with lots of fine singers. Given any encouragement, we'll come back at you with choruses, harmonies, and good natured supportive heckling. We feed the head, which for a performer can be as important as the pocketbook. Many fine national performers make it a point to include us on their Northeast tours. We are a well-run organization (if I do say so myself), and we treat you right.

Performers and agents interested in securing a booking should be aware that we do not have a "season." We hold a show virtually every Friday of the year, but that the 2nd Friday of the month is generally reserved for our Open Stage or some other special function. We generally book 3 to 12 months in advance for feature acts and 2 to 8 months in advance for openers (although that can vary a lot sometimes). I must have a feature act booked on a given date before I can confirm an opening act booking for that date. You can refer to the Troubadour page to see our schedule as far ahead as is booked to look for which dates are open, and might coincide with your touring schedule.

Now for the bad news: I usually have to see a performer in person before booking a feature act. My judgments are based on more than just out-and-out musical prowess. Heavily weighted in my consideration are such elements as rapport with the audience, intelligence of presentation, content and poetry of lyrics (for songwriters), balance and diversity of musical style in a set, ties to traditional music, more undefinable and esoteric qualities and, of course, an act's draw in our area. I prefer to see this for myself by seeing a performer live. I have made exceptions based upon recommendations from those I trust implicitly or from live concert recordings.

If you want to send me a demo, bear in mind the following requirements:

Most acts I book from demos are openers. I have to be really blown away by a recording to book a feature act on that basis. In grey areas where I'm not sure, I've occasionally asked a performer to do an opening set on a sort of a paid audition basis. If I'm really blown away by a demo, but feel they might not draw enough to make a headline set worthwhile for either of us, I will occasionally ask them to do an opening set in front of a headliner that will draw a sellout crowd, and then a headliner of their own some months later. I'm aware that this makes it hard on a performer, particularly a traveling professional, but the facts are that the system works for us, and we have no shortage of fine acts. If you'll be playing in the area, let me know. I can't promise, but I'll try to get to hear you.