Dustin Welch was born and raised by a songwriting family from Nashville, Tennessee, where he was surrounded by and grew up with an affinity to meaningful music. As a youth, he had a natural ability to play any instrument he could get his hands on. He wound up with a penchant for banjo, and the acoustic and gut-string guitars. Welch’s voice is gritty and raw, archaic and profound. His songwriting is fearless, and it reflects a shared sense of desperation-hardened fortitude — along with hints of mono-mythic mysticism and that glimmer of hope and redemption spawned amidst the darkness of hard times.

Dustin’s creative and genre-breaking approach to songwriting can be heard in his folk albums – Whiskey Priest and Tijuana Bible, where he plays the part of a wickedly mysterious carnival barker, bouncing strains of Americana, rock, and folk music off of each other like a hall of funhouse mirrors. His lyrics are similarly multifaceted, reflecting literary influences ranging from American gothic to gritty pulp fiction, and themes both sacred and profane. He combines the essence of Celtic and Appalachian folk music and sets it to driving rock and dexterous jazz rhythms.

Welch is from Texas and is new to our corner of the country. He came to our attention because of his tremendous work with veterans, helping them work out the passions and pain of war through a heartfelt process of songwriting and self-exploration. That makes him a special, as a person and a musician that must be heard. 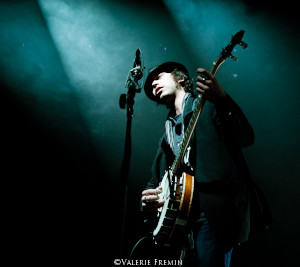